The future of the technology industry, the opportunities and challenges posed by China, and the power of critical thinking were among the topics covered when Kenneth C. Chenault visited Long Island recently to take part in the SUNY Old Westbury Executive Leadership Forum.

Before an audience of 300 leaders from Long Island business and civic communities as well as students from the College, Chenault offered his views on business, leadership, community development and more through a question-and-answer session with College President Calvin O. Butts, III.

“At Old Westbury, we seek to instill in students the skills and knowledge they will use as they move forward in life,” said President Butts. “Equally important to us is helping them realize the commitment they must have to serve the communities in which they live and work. I would be hard pressed to find for our students a better example of the combination of professional success and public service than Ken Chenault.”

Chenault retired in January after 17 years as chairman and CEO of American Express to become chairman and managing director of General Catalyst, a Silicon Valley venture capital firm that has made early-stage and transformational investments for such market leading technology companies as Airbnb, ClassPass, Datto, HubSpot, KAYAK, Snap, and Warby Parker. He is recognized as one of the business world’s experts on brands and brand management and has been honored by multiple publications including Fortune Magazine, which named him as one of the World’s 50 Greatest Leaders in its inaugural list in 2014.

Through the Executive Leadership Forum, the College seeks to bring thought-leaders from an array of industries and disciplines to Long Island to provide their perspectives on leadership, ethics, the everyday challenges they face, and current affairs impacting international industry and society.  Proceeds from each event benefit the Old Westbury College Foundation, Inc., the not-for-profit organization that raises funds to support student scholarships and the College’s academic and student service offerings.

His Move to Venture Capital

The Chenault-Butts conversation covered numerous topics. Now the managing director of the Silicon Valley venture capital firm General Catalyst, Chenault explained his rationale for choosing the VC community as the next phase of his career.

“In business, if you stand still, you fall back,” he explained. “You either innovate or die. For me, American Express had always been engaged in technology and digital services. What is exciting about working with some of the founders of these companies is they are really passionate. They have an incredible vision of what they want to do with their companies. They really do want to change the world, and that’s exciting to me.”

He also cited as a key factor in his decision his interest in helping technology companies become more reflective of the citizens they serve.

“In the venture capital technology industries the lack of diversity is incredible,” he said. “And so you have this very dangerous dynamic that the future is technology and digital, and yet people are being left behind.  Frankly, the business side was interesting for me, but the issue was if I was going to go do something I wanted it to be meaningful in people’s lives and deal with an issue I felt was an important issue.  Diversity in the technological and digital side broadly for all nationalities, races and genders is very, very important.”

The Need for More Critical Thinkers

On his views on the linkage between education and industry, Chenault sounded a call for an “impassioned argument” for the value of higher education that is not just tied to the economic benefit of earning a degree but to the need to promote critical thinking.

“When people say we live in a more uncertain world or a more complex world where things are harder to figure out, then that says very clearly that we need more people who have a liberal arts education and who have an understanding of different subjects and not just one major,” he said. “It is very important to have disciplines where people can be trained in specific fields. But it is also important and useful to have poets. People who can interpret our society and take a different perspective.”

China, Data and a Free Society

“I take a view that China represents both an opportunity and a threat,” he said. “And it is our job, from the government standpoint, from a business standpoint, to figure out how to balance what we do.”

He noted that relations with China, one of the world’s largest economies, are vital and the United States has to be more sophisticated in dealing with that country.

As a member of the board of directors of Facebook, Chenault cautioned all present about the need to cope with issues of improper data mining, hacking and more.

“One of the things I believe in very strongly is that, if we don’t figure out how to deal with data, information and privacy in our society, the free society is lost. This is much bigger than any company problem, which is another reason I wanted to get into the venture capital space.”

“Operate on the Margin of Your Ignorance”

In terms of advice for those seeking to succeed and become leaders themselves, Chenault’s message was simple.

“My view in life in general is that you don’t run from challenges; you embrace challenges and try to make a difference,” he said. “I always tell people, ‘operate on the margin of your ignorance.’ You should always be pushing the envelope and trying things. If you just go the conventional way, you’re not going to be a leader.” 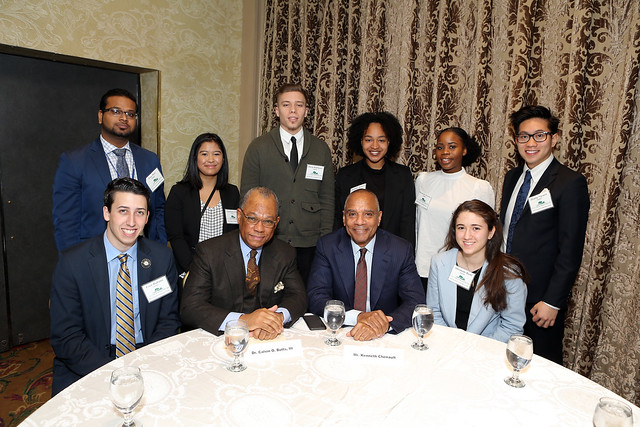